THE ART OF RENÉ LALIQUE

Rene Lalique's life and artistic career bestrode arguably the three most important movements in the field of the Decorative Arts - Belle Epoque, Art Nouveau and Art Deco. The same period witnessed the evolution of decorative glass with several defunct manufacturing techniques originally invented in Ancient Roman times being re-discovered and employed by the 20th Century's new generation of artists. Rene Lalique's contemporaries, Emile Galle and the American Louis Comfort Tiffany, worked predominantly in Art Glass, distinctive for its rich combination of color, botanic motifs and iridescence. These facets, although of great beauty, tended somewhat to disguise the medium of glass itself. Rene Lalique, however, stood out from his contemporaries by being the 'purist', who applied his talent to the inherent merits of glass, and thereby elevated it to new heights of technical and artistic interpretation.

Lalique was born on April 6th 1860 in the small French town of Ay in the Marne region. While still an adolescent, he won several awards for his illustrations, and by 1890 had achieved an enviable degree of success as a silversmith, goldsmith, enameller, sculptor, designer, and of course as a jeweler. It was in this latter field that he first gained worldwide renown.

Working initially in the long tradition of 'Grande Joaillerie', his genius eventually found expression through his rather avant-garde bijouterie, and his reputation as the world's leading 'new wave' jeweler was firmly established with his success at the Exposition Universelle, held in Paris in 1900. His exhibits were exceptional for their disciplined yet fantastic designs, and the bold combination of semi-precious stones, metals and even glass.

Glass held the greatest fascination for Lalique, evolving into commercial success after 1907 through his relationship with Francois Coty, principal of the eponymous perfume house for whom Lalique created a number of exquisite scent bottles. Building on this success, Lalique went on to design and manufacture a wide range of sumptuous glass ware, for which he is today most renowned.

Accolade after accolade came to Lalique in the 1920's. 1925 saw his highly successful presence at the Exposition Internationale des Arts Decoratifs, and the following year the creation of the famous pair of fountains 'Fontaines de la Galerie des Champs Elysees' exhibited at the Salon des Artistes Decorateur and subsequently installed at the Galerie du Lido. His reputation was then assured that of an artiste verrier who saw glass with the eye of a jeweler but treated glass with the hands of a sculptor.

The advent of the 1930's witnessed the period of his greatest commercial success. Many truly astonishing items of glassware were produced, including a range of 30 glass car mascots mainly of female nude or animalier form. Lalique had shrewdly recognized the vogue for automobiles de luxe and offered its devotees his sensual mascots as the ultimate automotive adornment. His vases and tableware have also become highly coveted collectable items achieving spectacular prices.

Lalique's factory, employing over 500 artisans, flourished through the 1930's. He was paid an enormous compliment in 1938 when the French Government commissioned Lalique to produce a spectacular surtout de table entitled 'Caravelle' which was presented to Their Royal Highnesses King George and Queen Elizabeth of Great Britain on the occasion of their State visit to France in 1938. Many other important commissions had been placed with Lalique during the 1930's, and the world's wealthiest and most discerning connoisseurs sought out Lalique to add his indefinable genius to their interiors, and his patrons included Indian maharajahs, American billionaire industrialists, the great Hollywood stars and European nobility, as well as almost all of the surviving crowned heads of Europe's Royal Houses.

Although Lalique himself just survived the Second World War, his factory sustained severe damage in the fighting, and many priceless designs and moulds were lost. His son, Marc, restarted the business in the late 1940's, which continues in its present form to this day.

Of all the eulogies and posthumous praise heaped on Lalique after his death, one is most worthy of recounting. One of Lalique's greatest friends and lifelong patrons, the American oil billionaire Calouste Gulbenkian wrote: "He ranks among the greatest figures in the history of art of all time". This was praise indeed coming from an art collector whose collection included works by Rubens, Rembrandt, Rodin and Gainsborough as well as some of the finest works by Lalique. 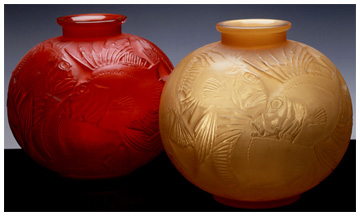 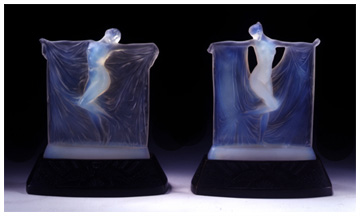 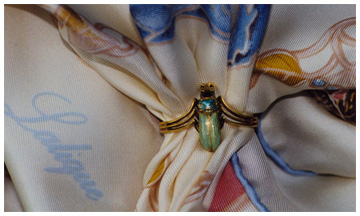 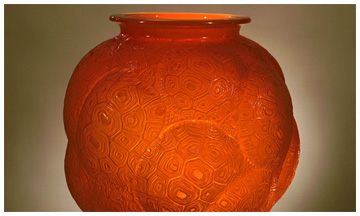 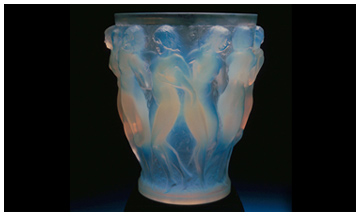